Dec 2013 was a special month for me with a number of great jobs ... none however were quite as special as Raffi's First Birthday Cake Smash ... I've known Raffi all of his life and took pictures of him as a new born, I've known his mother even longer and have a lot to thank her for.

My little reminder popped up in November about Raffi's birthday and I suggested a portrait session,  Mum came straight back with the Cake Smash idea.  I loved it and really went into a fair amount of research for the job. The advice was very much the shoot could be over in minutes or could take some time as baby gets used to the idea of cake.

I really wanted a different look for the pictures so instead of my normal high key pictures I wanted some really high contrast and colorful images to take away.  I knew the cake was going to be blue so I went for a colour clash and used a bright red paper roll background.  I also know I would be taking a lot of pictures very, very quickly and I couldn't necessarily rely on the speed of flashes to recycle quickly enough. 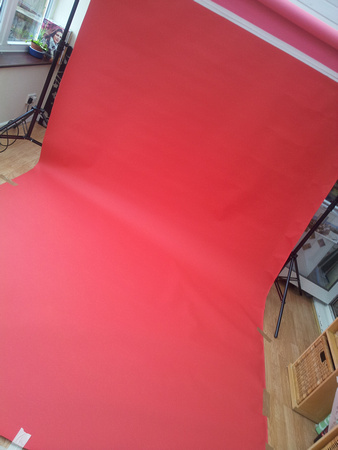 So in pretty much a first for me I shot the entire set against a colour roll paper backdrop and used only natural light.  Thankful it was a nice bright, but overcast day that let a huge amount of light into the conservatory without casting shadows.  I also shot a lot of the pictures with a 50mm f1.4 prime lens meaning I could keep iso and shutter low to maintain clean crisp images.

So here is a long shot of the studio ready to go, a little later we added the Happy Birthday banners to add a bit more depth of field and interest.

So now all I had to do was add a baby and a cake.

They say don't work with babies and animals ...

I was able to get great set up shots of cake and background but poor old Raffi was more interested in the chocolate he was holding onto rather than the cake ...

A little bit of coercion later and if I'm honest a little help from us in breaking the cake up and all was well and interest in the cake was renewed.

I ended up with a huge number of really good photos and had a great time taking the pics.

Once into the swing of things, and due to the use of natural light I was really able to move around a get some interesting angles on the shots.  A picture can change massively just from the angle it's taken from ..

I had a great time as did little Raffi and his Mum and can't wait for the chance to take some more Cake Smash pics again ..